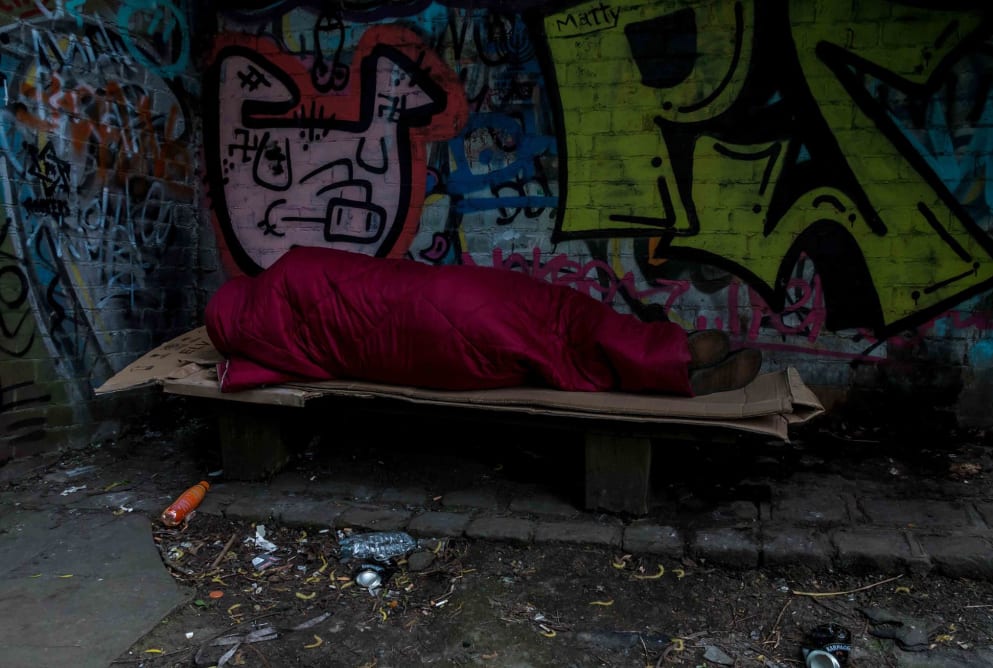 Human trafficking involves the movement of a person from one place to another into conditions of exploitation. This can include labour exploitation, sexual exploitation and domestic servitude, among others.

Trafficking is a risk for people who are homeless, insecurely housed or otherwise vulnerable. People may become homeless after escaping exploitation, or be targeted by traffickers while using homelessness services.

Trafficking does not just refer to a person being taken across country borders and can also refer to people being trafficked between places within the UK.

National Crime Agency figures show that the number of people referred to the authorities as potential victims of modern slavery in saw a 36 percent rise in 2018 compared to 2017 figures.

UK nationals make up the biggest group of potential victims of human trafficking in the UK, according to Anti-Slavery International. Other common countries of origin of victims include Albania, Vietnam, Romania and Poland.

Rough sleeping has been identified as a key factor in increasing the risk of individuals being trafficked. Evidence suggests that the majority of British nationals who have become victims of trafficking have been sleeping rough and/or had mental health issues or learning difficulties immediately prior to being trafficked.

The offer of work or accommodation when homeless can seem too good to be true, especially when the homeless individual has no recourse to public funds and cannot access emergency accommodation or housing support through the local council.

Other groups that are vulnerable to homelessness and therefore exploitation and forced labour include failed asylum seekers, trafficked immigrants, legal migrants and visa overstayers.

This month, two of our outreach workers, in conjunction with Hope for Justice, conducted outreach outside of the city centre. We met three individuals who told us they were victims of human trafficking. As a result of our joint outreach these three people have now been moved to a safe house.

Alex had no recourse to public funds due to his immigration status and was not able to receive housing benefits or access emergency accommodation. The only money he received was through begging.

Our outreach worker continued to meet up with Alex over the next few months to offer emotional and practical support to look at his settled status, taking him out for breakfast and signposting him to services where he could get showered or access food.

A few months after I first met Alex he disappeared. I continued to check all his usual sleeping spots but could never find him.

I only recently came back into contact with Alex again. He told me he had been taken by a group of men to another town and coerced into forced labour. He had managed to escape and walked all the way back here.

We worked in partnership with Hope for Justice and Alex was entered into the National Referral Mechanism, the government’s system for identifying and supporting victims of modern slavery. He is now safe and in housing.